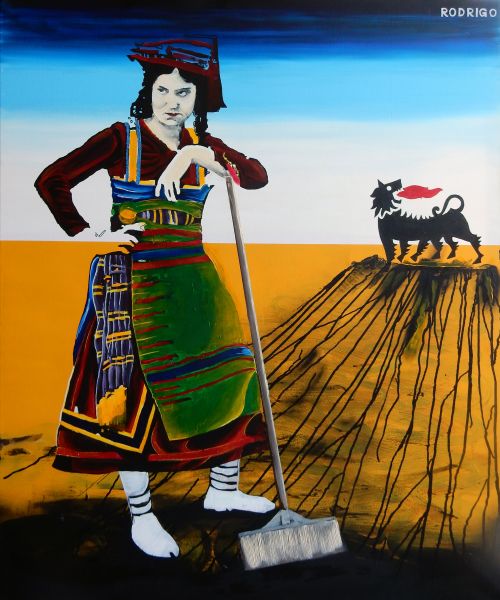 I've been mainly living in Val D'Agri, a remote valley in the south region of Italy called Basilicata for the past 2 years now and I've got acquainted with the region's traditions, culture and realities. It so happens that this region was, during the unification of Italy's (1848 - 1870) period, the niche of the Briganti. The Briganti were rebels who would fight the northern piemotese who came to unify and create the Italy republic we know today at the expense of the kingdom of the two Sicily with guerrilla tactics.

The Briganti remain as a symbol of meridional resistance and cultural specificity until today for the people of the region. To talk about today's situation, it also happens that oil was found and exploited in this region for a bit more than a decade now by national's italian Oil company: ENI. This region produces around 15% of Italy's consumption of oil and has the biggest inland refinery of the country in this very valley at the beautiful, picturesque and tradition full town of Viggiano. 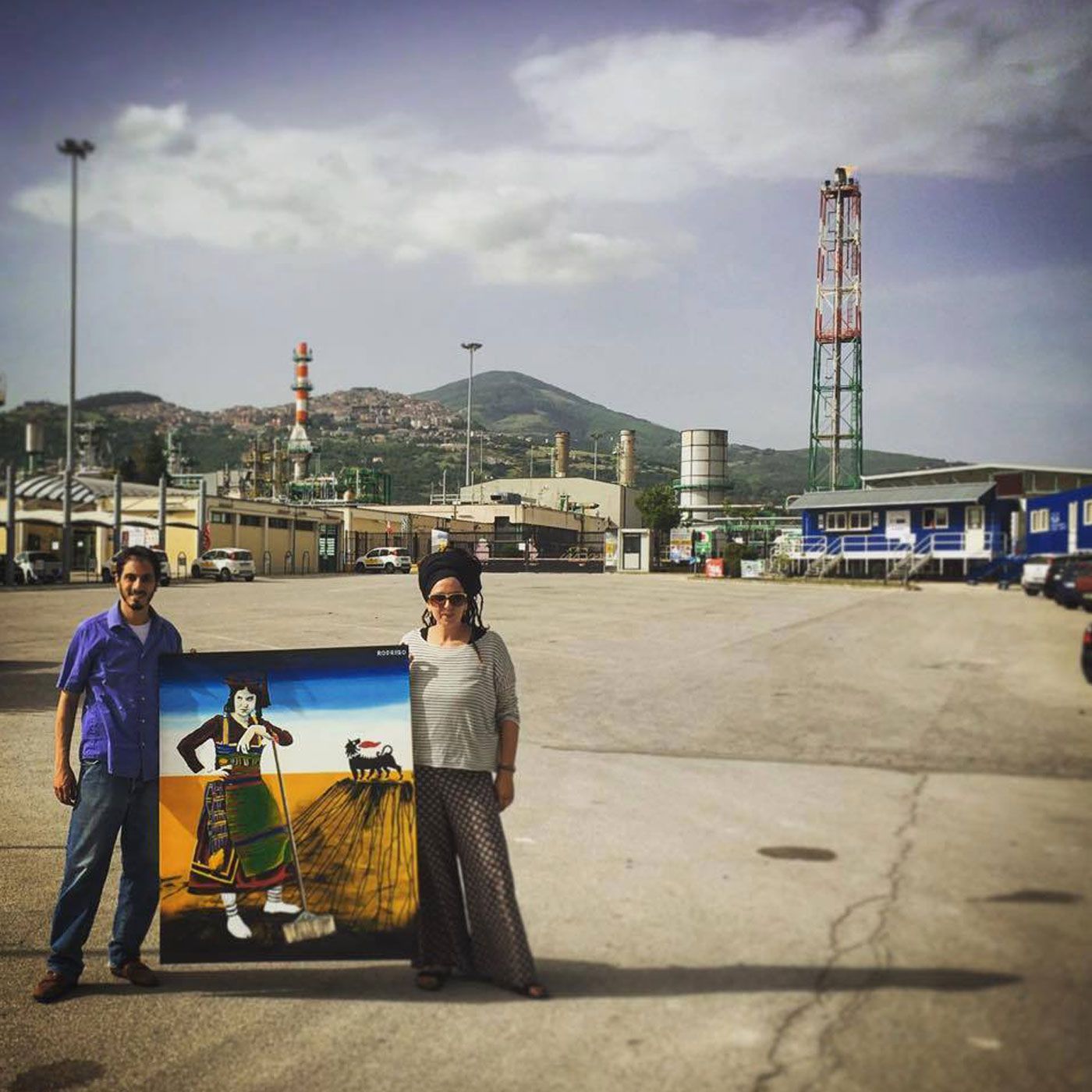 Alongside Marica Di Pierri, italian environmental and social activist in front of the "centro oil" it self under Viggiano (Basilicata) 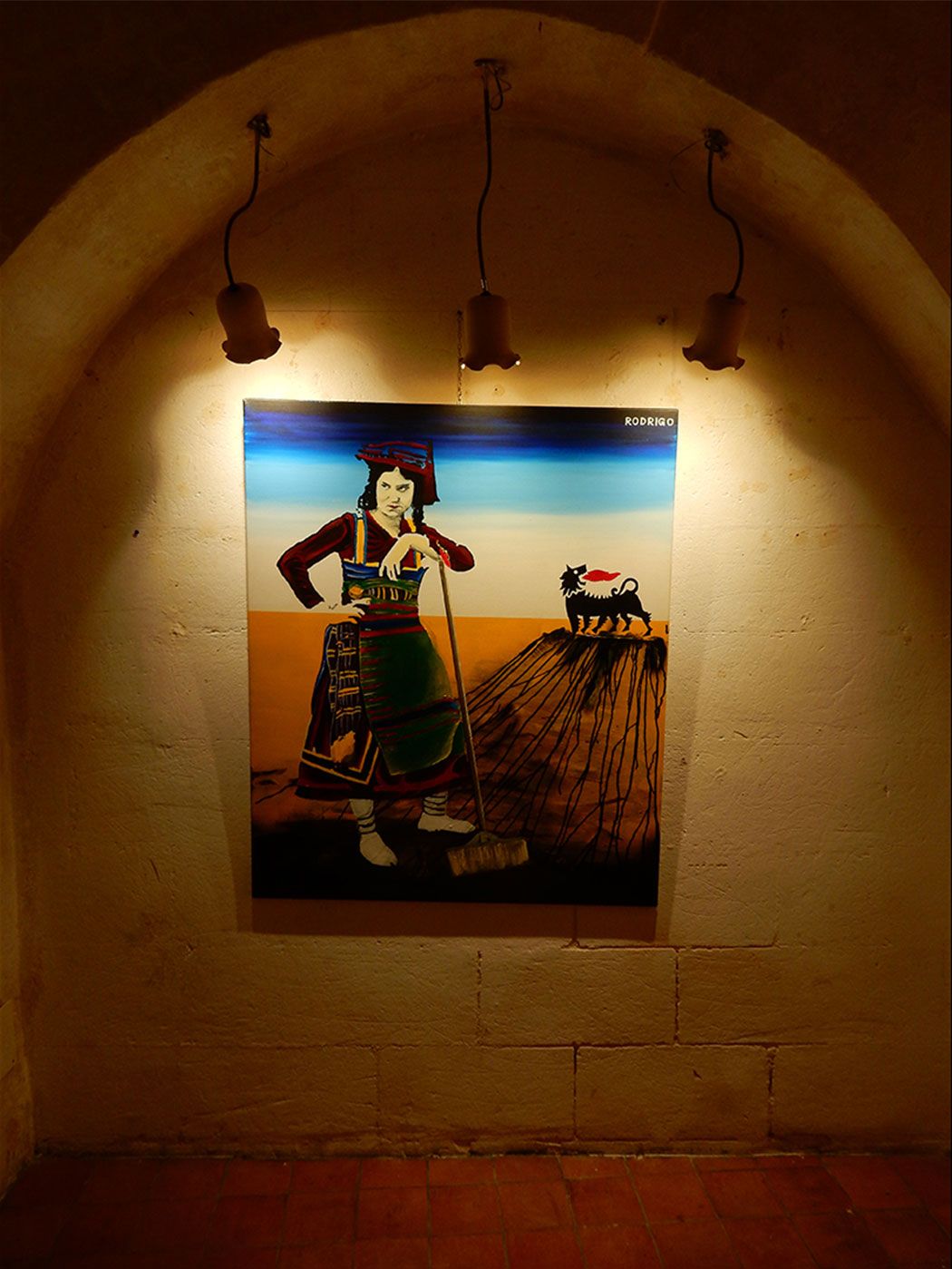 Eni's maid at my first show at Matera dispalyed in a Sassi (Unesco worlds heritage site and 2019's European Capital of Culture.

Now that the set is established, I'd like to share some insight on the reason I painted this piece and on the symbolic and messages I decided to convey with it. The starting point was the fact I've become an artist known for making "libertarian" art and flag bearer (with my pieces) of many causes around the globe, per example: Venezuela's student protest, Kurdistan woman fighters, etc...  As I'm starting to slowly been recognized by the people of the region (I have a letter from the president of the regional council recognizing me as of cultural interest for Basilicata) and in the world, People from the valley engaged in environmental militancy had been asking me for a while to make a piece for "our own causes". In early 2016, a scandal outreached in Basilicata when ENI's officials were caught cheating on environmental impact reports undervaluing the pollution impact on the zone. The energy minister of Renzi's government was discharged and the people of the region understandably outraged.

All of this got me thinking and inspired me the idea to make "ENI's MAID" I like my pieces to speak for themselves because I'm not necessarily alongside it to explain it to everyone and I expect it to carry a clear enough message to be perceived and interpreted by people on their own. That said, I'm going to give some inner thoughts about it for those who wonder what I meant to express. First, the most clear and obvious message is that ENI (represented by its 6 legged dog logo) is polluting the region and this is represented by the oil rivers that trickle down from it from the horizon towards the main character on the first plain.

That character is a lucanian Brigantessa called Michelina la Brigatessa and I used her most renowned photography dressed in traditional regional closes with a little, yet significant, change. She is normally represented in the photo with a Rifle that i traded for a broom to symbolize that she's now to clean the mess left by the national level company. This is the obvious and first degree message I meant to convey. Now, there's a bit more to it. La Brigantessa represents for me and people here a sense of pride in tradition and resistance to abuse. It is my opinion that it has been lost in way and this is also a criticism to resilience in the negative way. Accepting this matter of fact or being left there to cope with the effects however the sense of pride and protection of one's own territory against foreign abuse.

This piece is a discussion piece that I hope opens up debate and thinking about the relation between tradition and modernity and between the effects of macro impulsed activities on micro and particular realities. Is Michelina la Brigantessa left to be "Eni's Maid"?