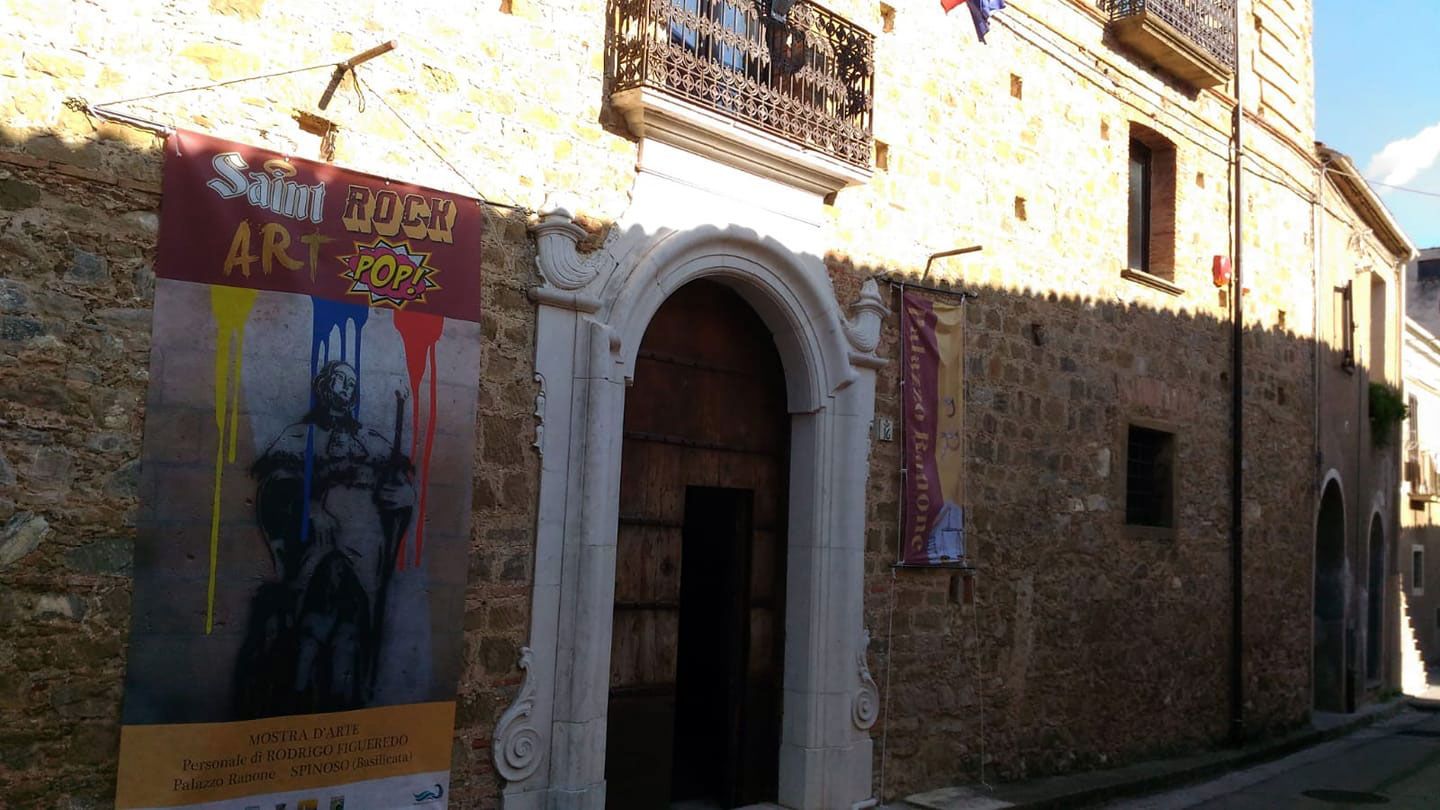 I ran this exposition at a very special place with a very special context and direction. This is one of my most accomplished mile stone as an artist. I meet "Lino" (Spinoso's mayor) during the shooting of a documentary/film in which both of us participated. It will issue on 2012 and it's titled "Due ma non due" (Two but not two) and the aim of the project was to promote the territory of Val D'Agri in Basilicata. We had a direct feeling and common understanding of the importance of culture and identities and of Art and History to put it in the light. During this shooting, We agreed on a first piece for the town (a Murales) that as used as part of the "storyline" to make a Street Art Piece in a special and symbolical place: The palazzo Caput. I choose to paint "San Rocco" because it's the patron of the place and I did it in stencil form (the modern discourse) on a Old and noble family' palace in ruins as support.

Lino simply asked me if I wanted to make a personal exposition in one very special place that they've been working hard on renovating and at first glance of the Palazzo Ranone, even before seeing the actual location, it was obvious that it was perfect, that the place was perfect for the works and vice versa. I felt like as if I as closing a cycle, in a positive way, I've been working hard for years to "prove my point" and now it seems like the space, community and locals agreed to open their minds to represent their the deep south of Italy, still almost savage, with and through the world and vice versa. 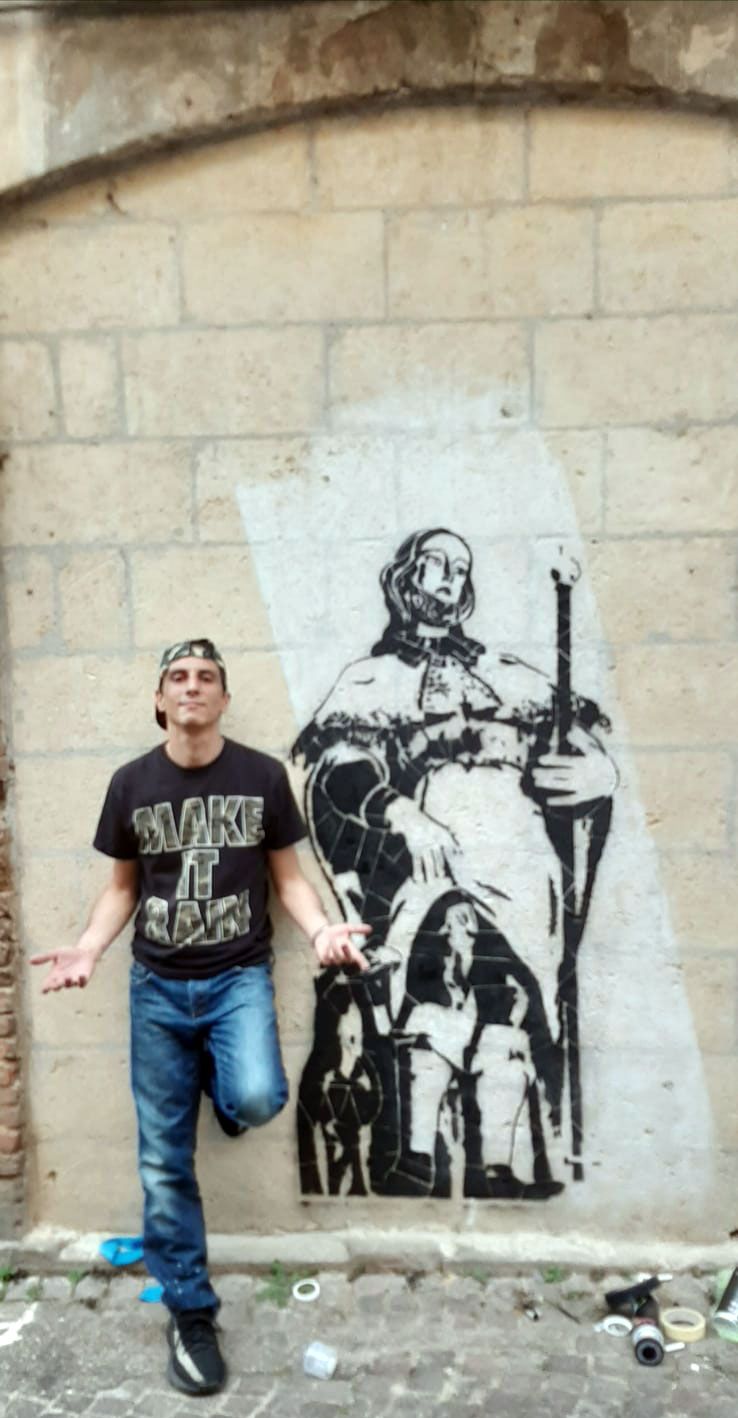 Mural of Saint Rocco painted during shooting of film/documentary: "Due ma non due" at the Palazzo Caput at Spinoso. Basilicata in summer 2020.

This show is the pinnacle of the language and project I've been working on. I said it like a thousand times to the people as I toured them around, that my idea was simple: Take the old and paint it new, take the local and insert it into the world (general and vice versa. I believe that one of the ways to conserve is to innovate and update the way we understand and communicate our own identities.

About the effects, experience and feedback of this exposition I can only say that I felt accomplished! A lot of people, from all ages near and far came to see both my work and the beautiful historical patrimony of the little, "lost" & "forgotten" town of Spinoso. People showed enthusiasm and understanding that my works of painting "San Gianuario" in a pop style or "La Madonna Nera di Viggiano" in a stencil and modern style was a tribute and something that ADDED and did not subtract to the maintaining of identities and insertion in the world in a win/win manner.

In conclusion, after 5 years of working and developing an artistic concept of re-appropriation of traditional and local symbols in a modern and actual form and language to end up closing the cycle by exposing these contemporary pieces on a medieval setting is, for me, a poem by itself and doesn't need much more to explain yet it has a lot to say and show. I published a set of "virtual tours" (one in Spanish and another in Italian) for those who would like to know/see more about this works and a set of beautiful photos of the expo itself. 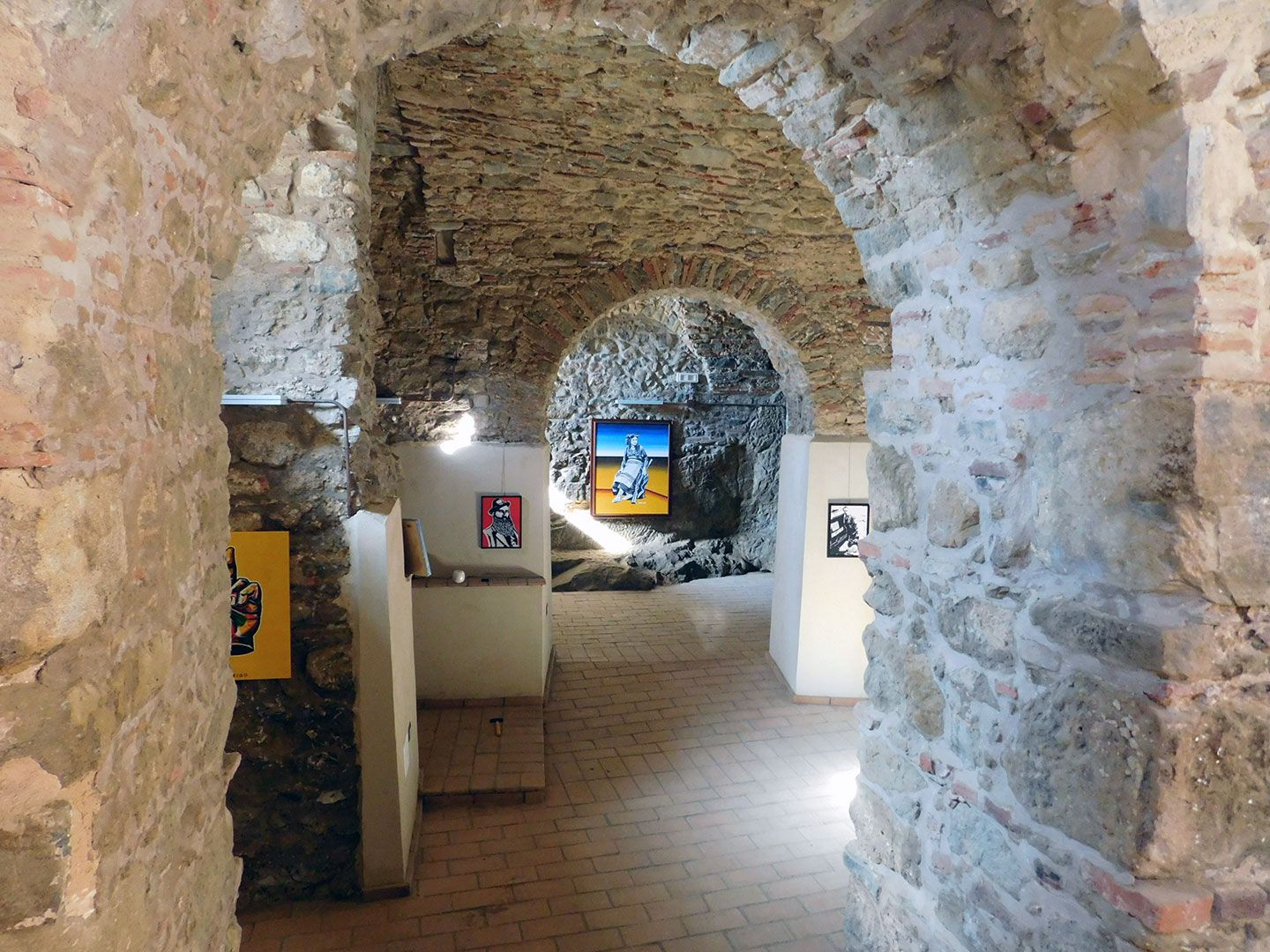 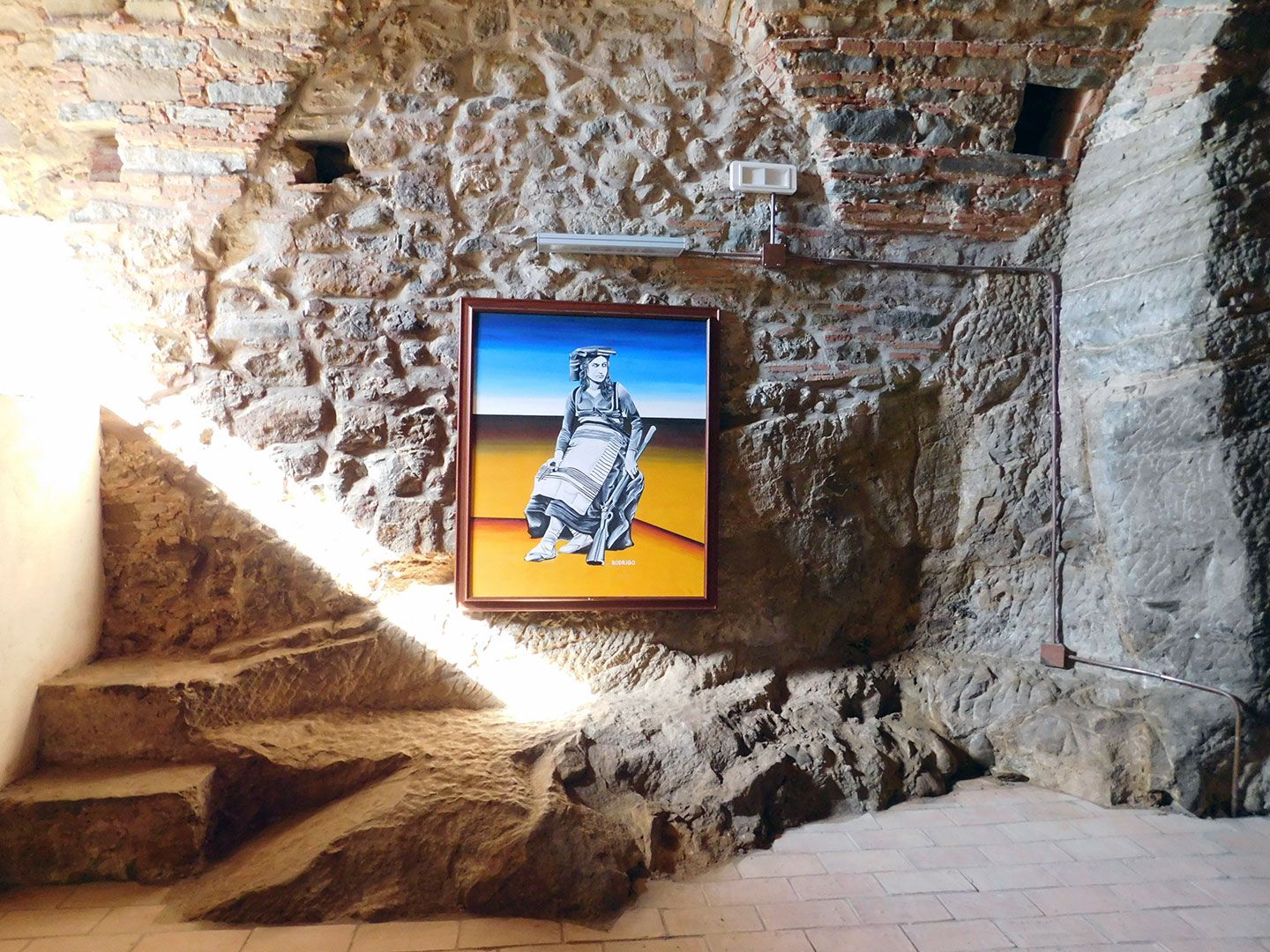 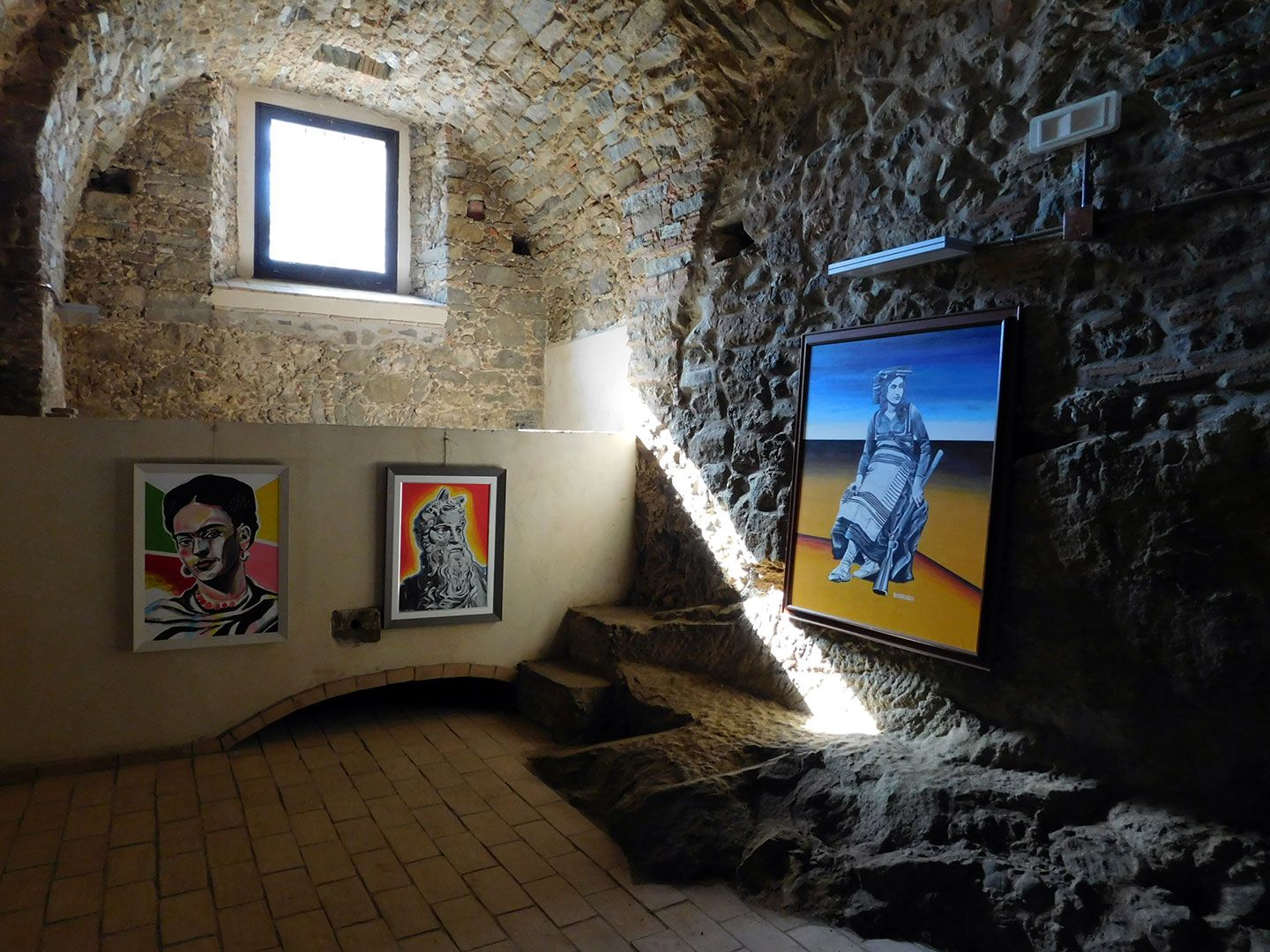 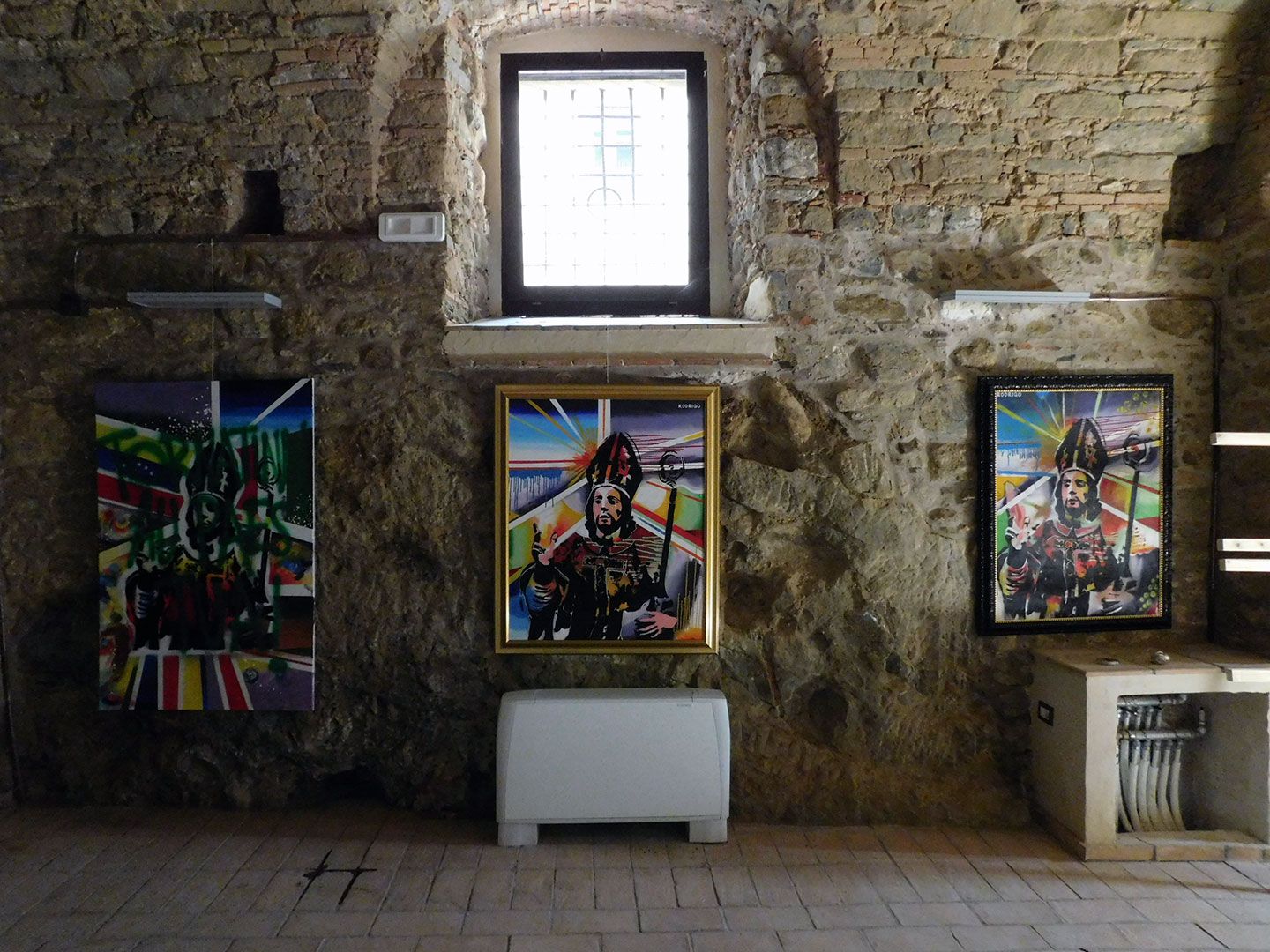 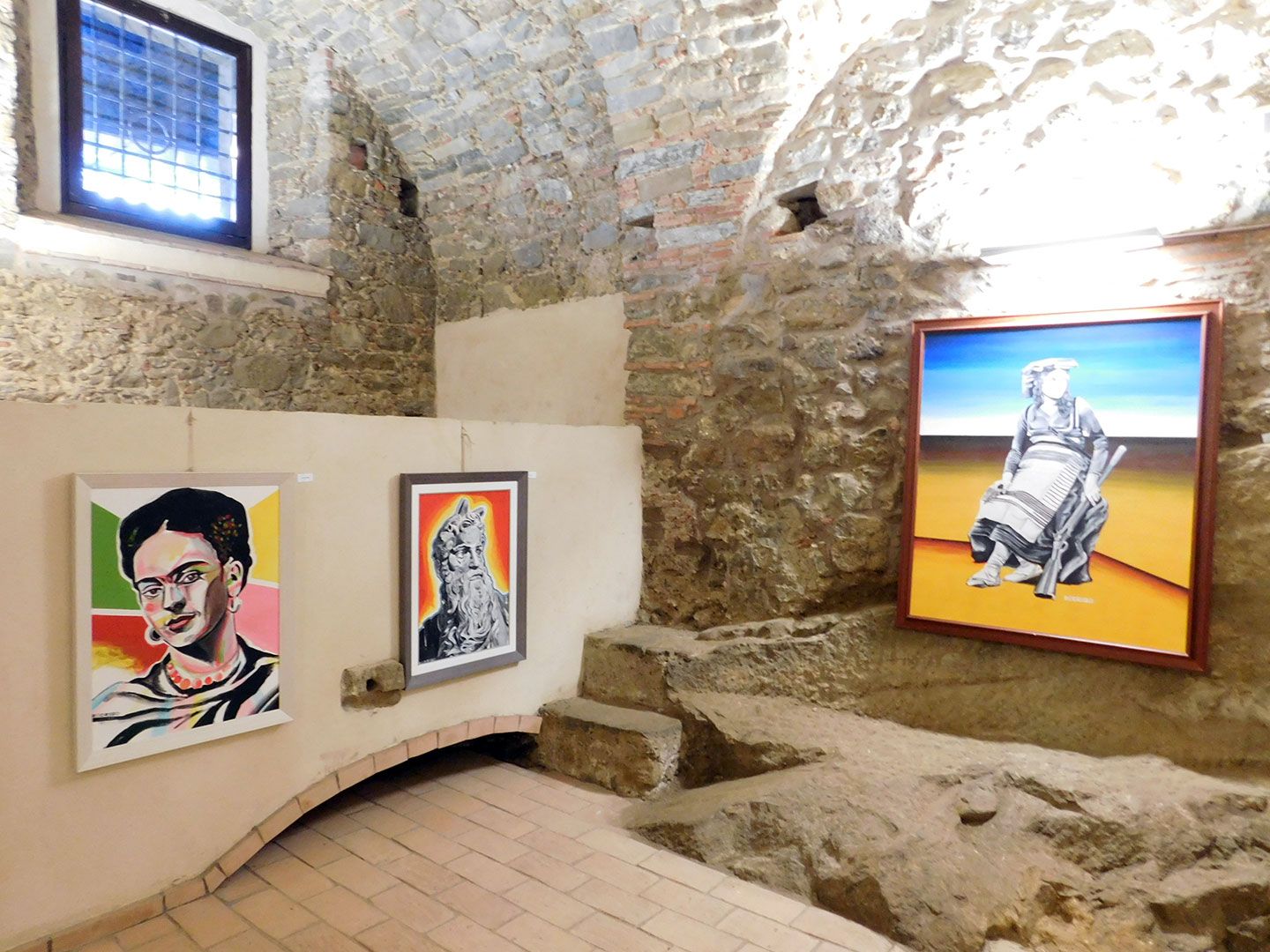 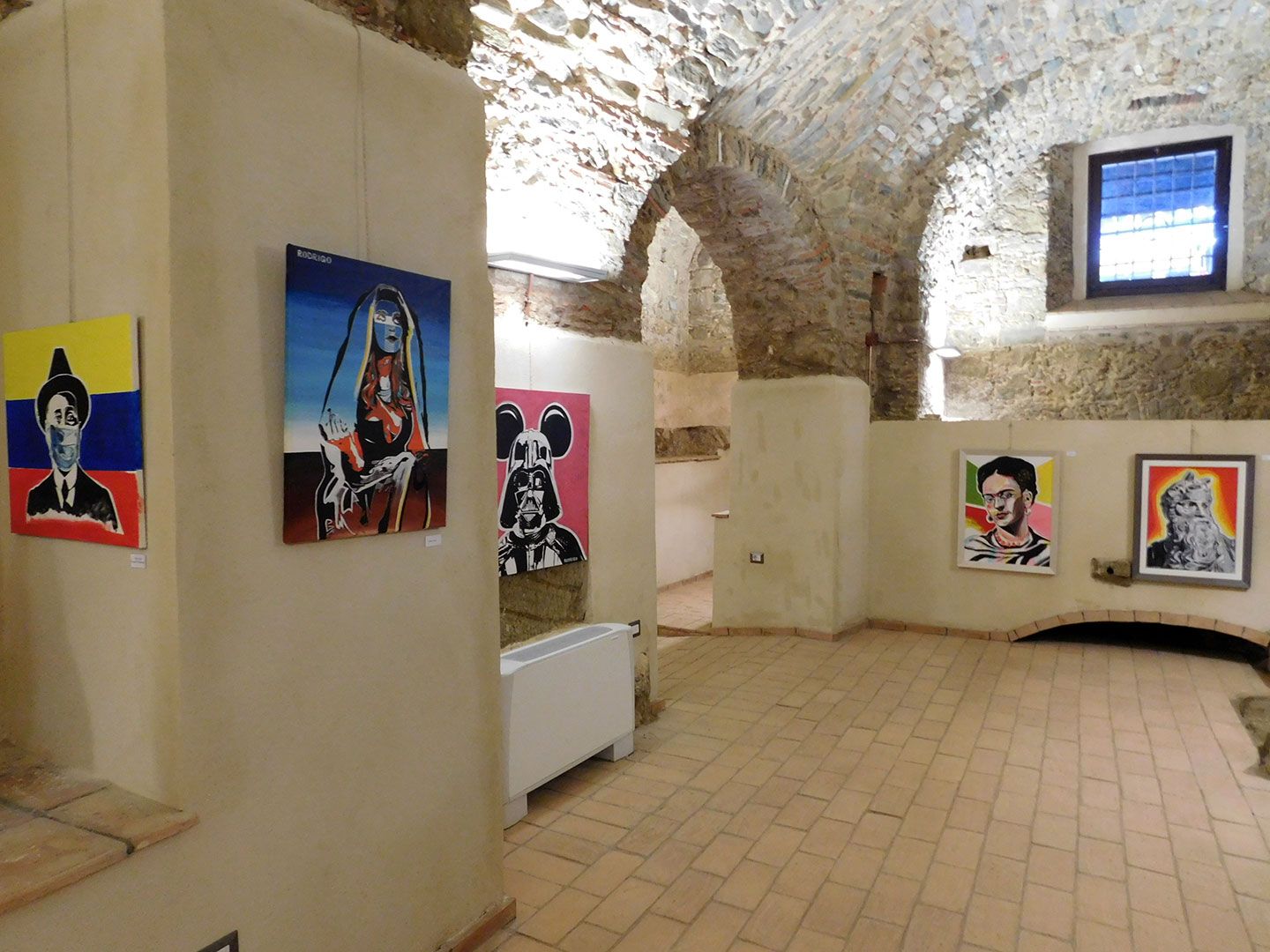 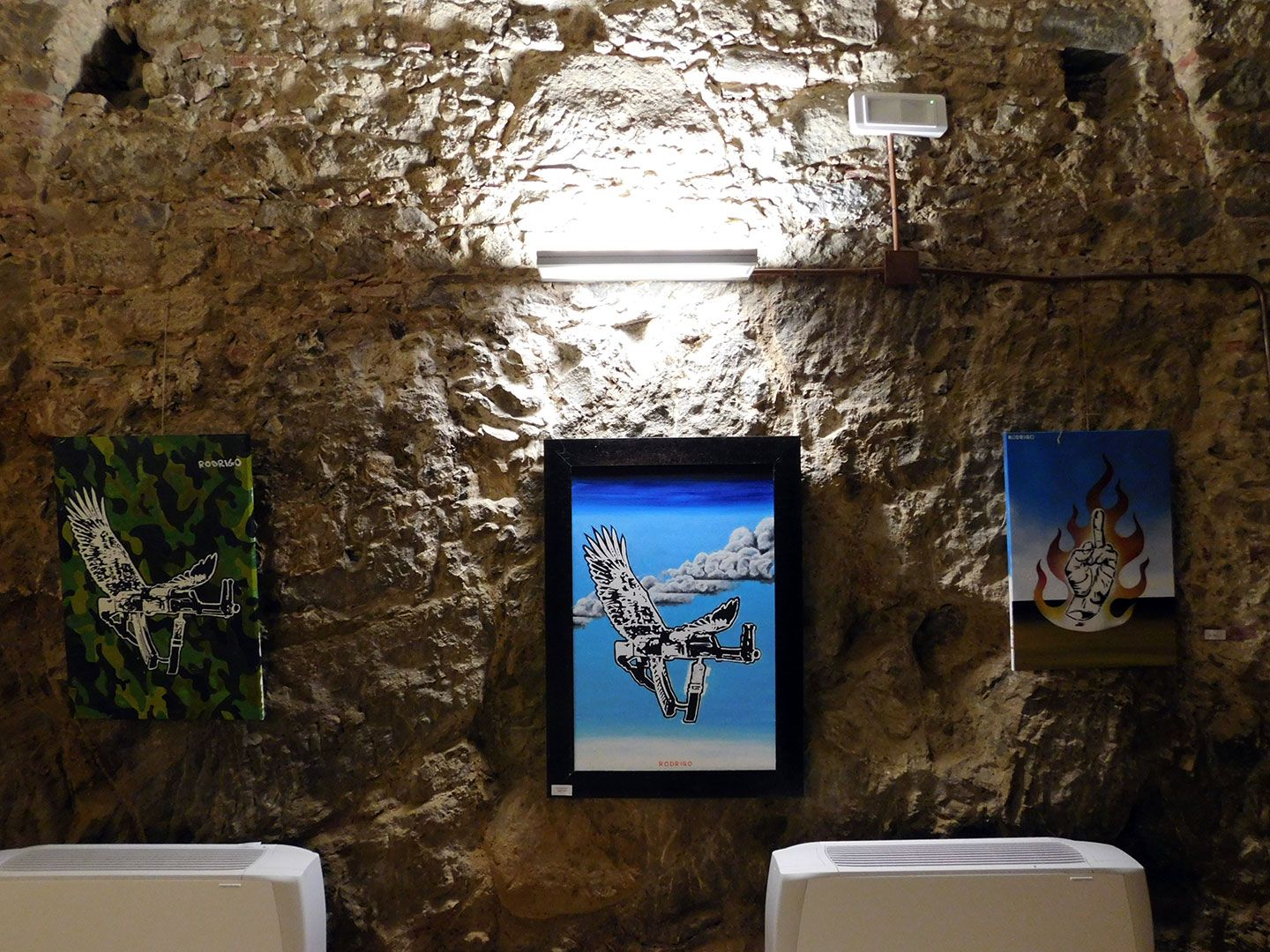 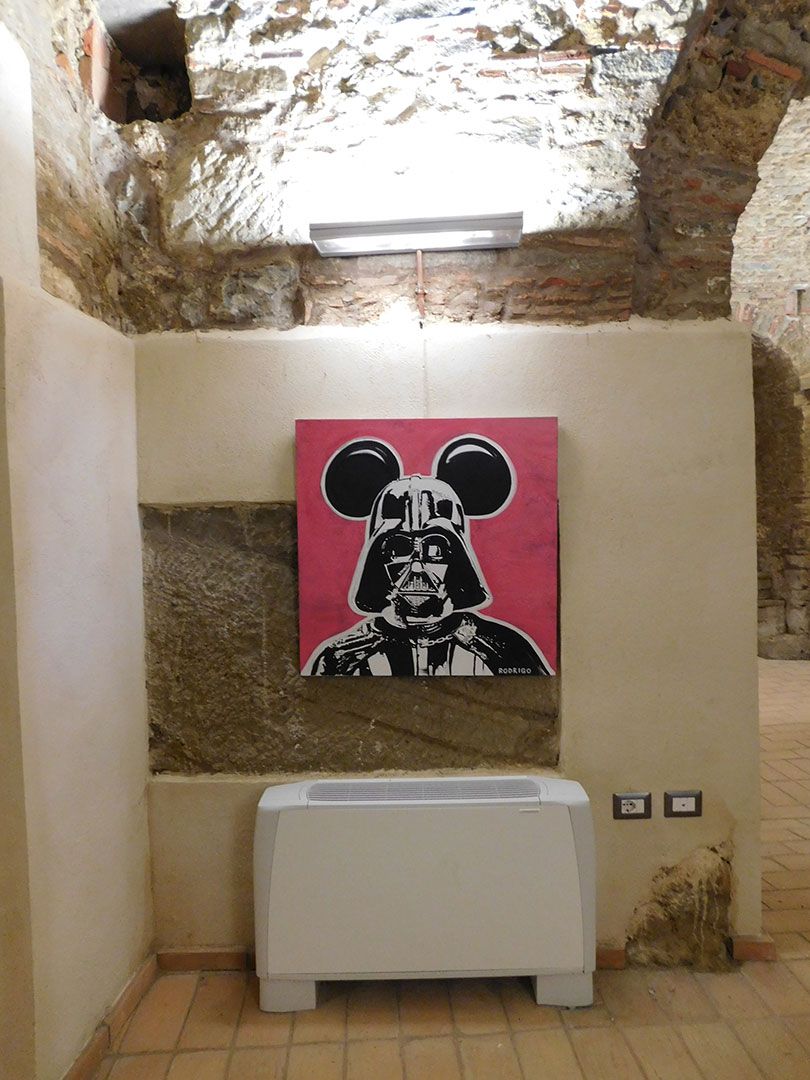 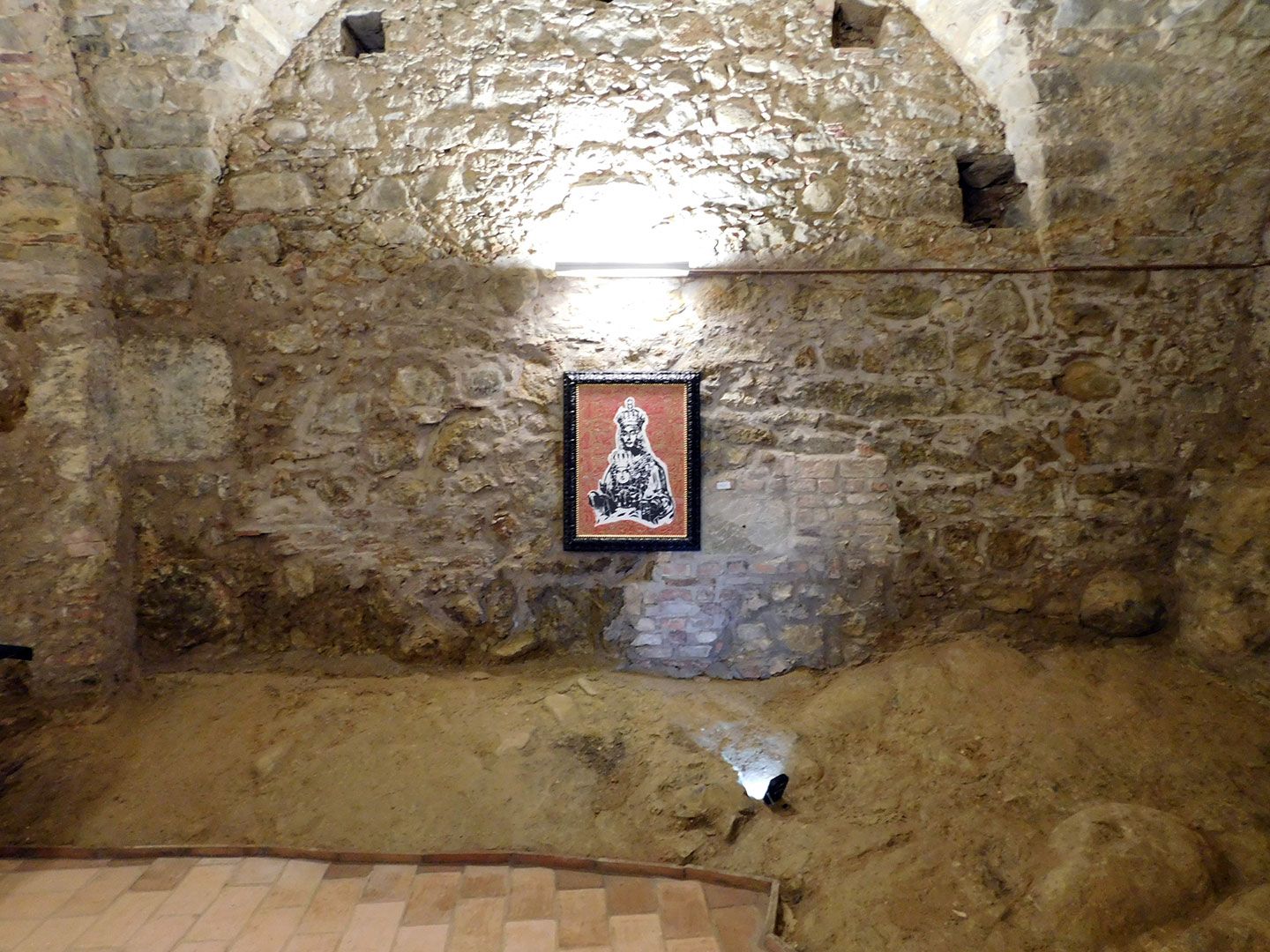