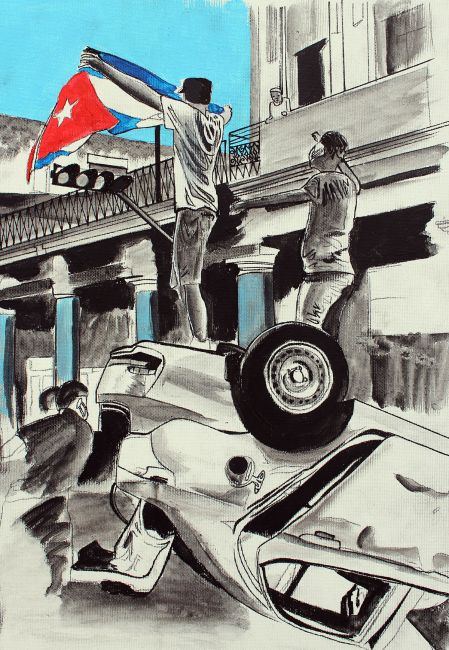 The 11th of July 2021 the Cuban people protested like they had never done since the beginning of the castrista revolution. It all started on the impulse of a group of artists called "Movimiento San Isidro" that confronted the regime with art, specifically with a song and a motto that said: "Patria y Vida" in opposition to the regime's "patria o muerte". That day, the world saw thousands of Cubans taking their protest to the streets massively like it had not been seen before. The totalitarian an repressive regime of Cuba answered with repression and propaganda so all the artists and human rights militants of the world accompanied the people in their struggle for freedom and democracy and I would be no exception.

This piece became utterly viral and it was shared by some of the most important Cuban human rights militants such as Yusnaby and It was co-opted by the "museum of Graffiti" in Miami for a special event where lots of artists produced pieces about the subject to be sold in auction to help the "movimiento San Isidro". I also produced an NFT of the piece that is available on rarible.

The piece "11 de Julio" was my humble add-on to support the courageous Cuban people who decided to yell for freedom. The dictatorship confronted the people because it's obvious that the 60 years of castrist communism have worn off to become un unsuited model for today's needs and expectations of the world and Cubans. As a pro human rights and artist militant I could not stand by and not participate with my art, as I've done for so much other causes in general and for Venezuela in particular, to fix on canvas this freedom cry and I choose to remake in art the most significant image of theses protests.

Images of the "We Are Connected" PATRIA Y VIDA Event at the Museum of Graffiti in Miami Wynwood 2021.