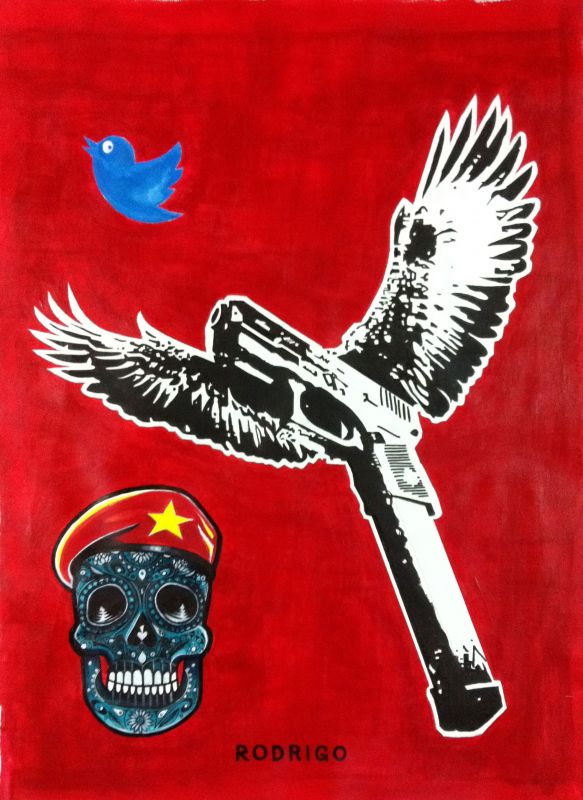 I made this piece after I was called out by "Diosdado Cabello" (one of the most infamous and high ranked official from the chavist regime) as one of the artist/opinion makers that the regime has in his top hit/detain list of people, influencers and opinion makers abroad. I signaled by this extremely negative and tyrannical person just because of my creativity and capacity to communicate in social networks twitter and because of the influence of my art in Venezuela. This piece is an expression of the way it felt to be forced into that position, yet, I use it to turn it into an advantage with construction and expression.

This piece was a product of a situation that originated from the venezuelan particulars in my dynamic as a politically and socially engaged artist but the scope of the message is universal. I used the symbols of "Mexican skull face" to emulate and incite the corrupt and narco-related nature of the regime and the red hat to symbolize the ideological part.

These symbols serve as "context-bearers" and the flying gun as a symbol of what the danger is under these circumstances. The twitter blue bird symbolizes freedom of expression. This piece has a sister piece that takes on another subject, yet it uses the same pattern of composition and symbol use to depict the same feeling.

"Long Bird of prey" is a closely related, both in thematics, composition and deliver. Click HERE to go to article.